A little while ago, Microsoft has revealed their newest operating system codenamed “Windows 8.” Unlike it’s predecessor Windows 7, Win 8 is built with a touchscreen in mind. As you can see in the image below, the new windows 8 interface is much like the windows 7 mobile interface, the Metro UI.

Even though there are big changes, Windows 8 will still cater those desktop type applications. You can still, of course, use your mouse and keyboard but it will be a slightly different experience. Other than that, mobile applications that are built on HTML5 and Javascript environment will also be able to run on this new windows. 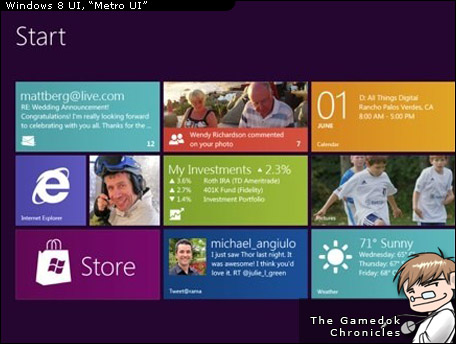 Microsoft also told Engadget that the new OS will run on laptops, tablets, and desktops. This is good news because there won’t be a huge hardware requirement to run the OS. But it is too early to tell right now.

There is no pricing yet and the date of the OS launch is not yet mentioned as well but there are demo units on their stage in Computex right now. More information is said to be revealed at the Windows developer conference this September.