Sony unveils its Xperia Z1 smartphone – complete with 20.7 megapixel camera, detachable lens and real-time video streaming to Facebook. In addition, the Z1 is waterproof and comes with a G Lens designed to take clear and colour-rich photos. It also has a detachable lenses can be fixed to a phone or used as stand-alone cameras – DSC-QX10 and DSC-QX100, they both have built-in Wi-Fi. It also comes with an LED flash, has a 5-inch display and includes a 3000 mAh battery to improve performance. In addition, Sony’s Smartwatch 2 will go on sale by the end of September. 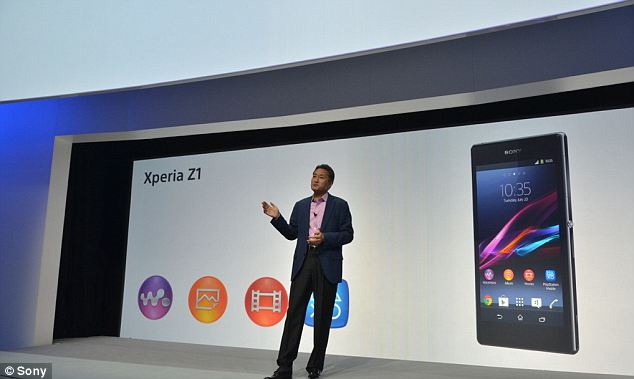 The Xperia Z1 which is part of Sony’s existing Xperia Z range of waterproof phones – runs a Qualcomm Snapdragon 800 processor with 2.2 GHz quad-core CPU and is 4G-ready.
Other features include Social Live, that lets users broadcast videos live from their Xperia Z1 to Facebook, and see their friends’ comments and likes in real-time.
Its Info-eye visual search lets users take photos of items and landmarks, for example, and get related information. During the conference, Hirai explained that with Info-eye users could take pictures of food, for example, and get wine recommendations.

The Xperia Z1 has Sony’s G Lens, pictured, designed to add richness to photos and reduce glare, alongside an LED flash. The device also comes with a Timeshift Burst feature that takes 61 photos in two seconds. The Xperia Z1’s Timeshift Burst feature takes 61 images in two seconds – a second before and after pressing the shutter – so you can scroll back and forth to find the perfect image.
The phone is now available for pre-order in black or white from network operator EE, Orange and T-Mobile.

All customers who pre-order the Sony Xperia Z1 through EE directly will also receive the Sony SmartWatch 2, worth £149.99 for free.
The Sony Xperia Z1 is available to pre-order on a range of 4GEE price plans and costs £29.99 on a £41 per month 24 month plan, providing unlimited UK call minutes and texts as well as 2GB of UK mobile data per month.

The Sony Xperia Z1 is also available 4G-ready on Orange UK and T-Mobile UK plans.
Other announcements from Sony included a range of detachable camera lenses.
The Cyber-shot DSC-QX10 and DSC-QX100 lenses attach to any smartphone running Android or iOS, with a width of between 54-75mm and a 13mm thickness.
Sony said the lenses were: ‘a dream come true for anyone who loves their smartphone but wants the photo quality that only a dedicated camera can deliver.
‘And whilst they look like lenses, the DSC-QX10 and DSC-QX100 are complete cameras in their own right.’ 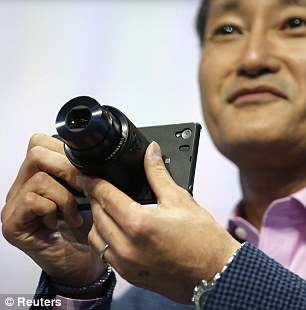 The DSC-QX10 weighs 105g and has an 18.2MP sensor with a high-quality Sony G Lens and a powerful 10x optical zoom range.

It also has built-in Optical SteadyShot to reduce the amount of camera shake, keeping handheld pictures and videos steady and blur-free, even in low-light conditions. 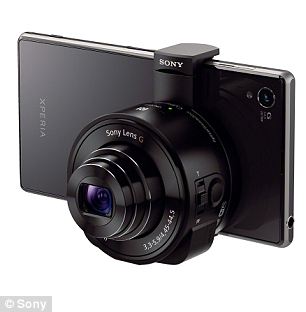 It additionally comes with a wide-aperture Carl Zeiss lens and 3.6x optical zoom with Optical SteadyShot.

Each lens has Wi-Fi and Near Field Communication (NFC) built-in meaning it connects to a smartphone wirelessly as soon as its attached to the handset.

Earlier this year, the Japanese firm unveiled its Sony Smartwatch 2 which is a combination of a watch with smartphone features.

It has a 1.6-inch LCD screen, is made from aluminimum and plastic and is said to work on the Android 4.0 operating system.

The Smartwatch 2 lets users to make calls, send and receive texts, take photos and listen to music, too and Hirai announced it will go on sale at the end of September and cost £149.99.