Although the report indicated the models, different batches might have different issues.

In Q1 2016, the hard drives in our data center, past and present, totaled over one billion hours in operation to date. That’s nearly 42 million days or 114,155 years worth of spinning hard drives. Let’s take a look at what these hard drives have been up to.

Below are the hard drive failure rates for Q1 2016. These are just for Q1 and are not cumulative, that chart is later. 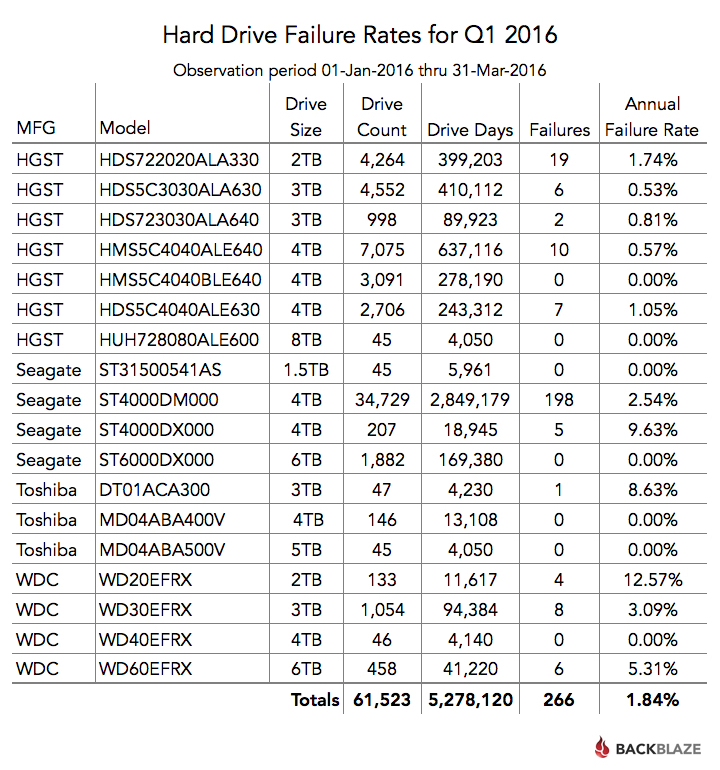 Some observations on the chart: 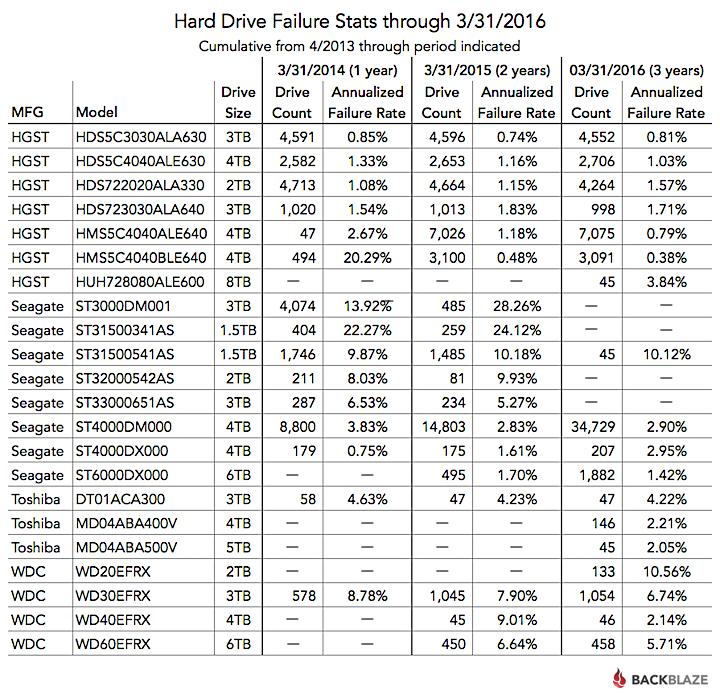 Let’s take a look at what the hard drives we own have been doing for one billion hours. The one billion hours is a sum of all the data drives, past and present, in our data center. For example, it includes the WDC 1.0TB drives that were recently retired from service after an average of 6 years in operation. Below is a chart of hours in service to date ordered by drive hours: 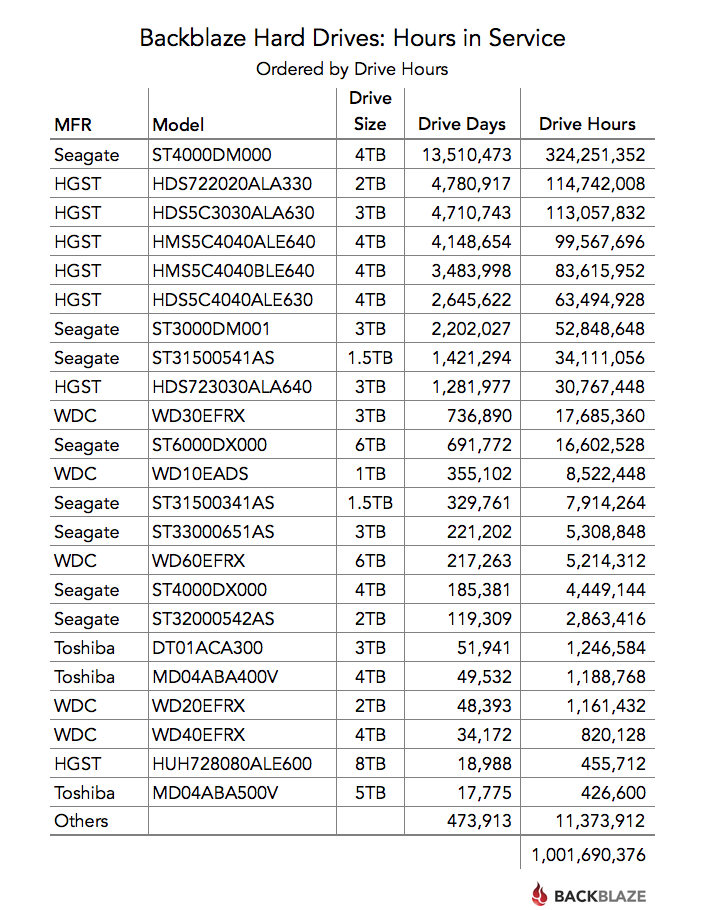 The “Others” line accounts for the drives that are not listed because there are or were fewer than 45 drives in service.

In the table above, the Seagate 4TB drive leads in “hours in service” but which manufacturer has the most hours in service? The chart below sheds some light on this topic:

The early HGST drives, especially the 2- and 3TB drives, have lasted a long time and have provided excellent service over the past several years. This “time-in-service” currently outweighs the sheer quantity of Seagate 4 TB drives we have purchased and placed into service the last year or so.

Another way to look at drive hours is to see which drives, by size, have the most hours. You can see that in the chart below. 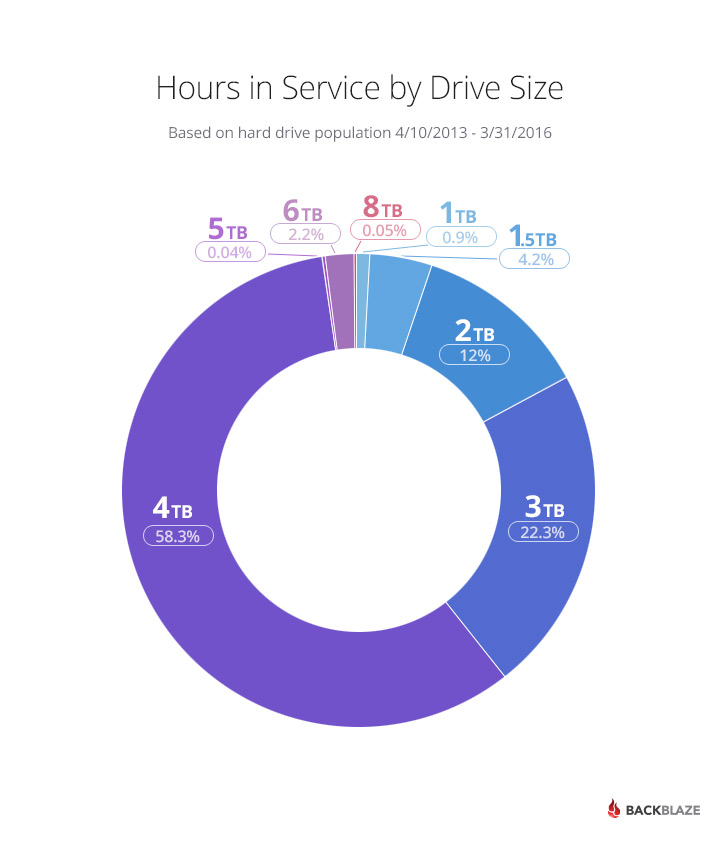 The 4TB drives have been spinning for over 580 million hours. There are 48,041 4TB drives which means each drive on average had 503 drive days of service, or 1.38 years. The annualized failure rate for all 4TB drives lifetime is 2.12%.

The drives in our data center come from four manufacturers. As noted above, most of them are from HGST and Seagate. With that in mind, here’s the hard drive failure rates by manufacturer, we’ve combined all of the drives, regardless of size, for a given manufacturer. The results are divided into one-year periods ending on 3/31 of 2014, 2015, and 2016. 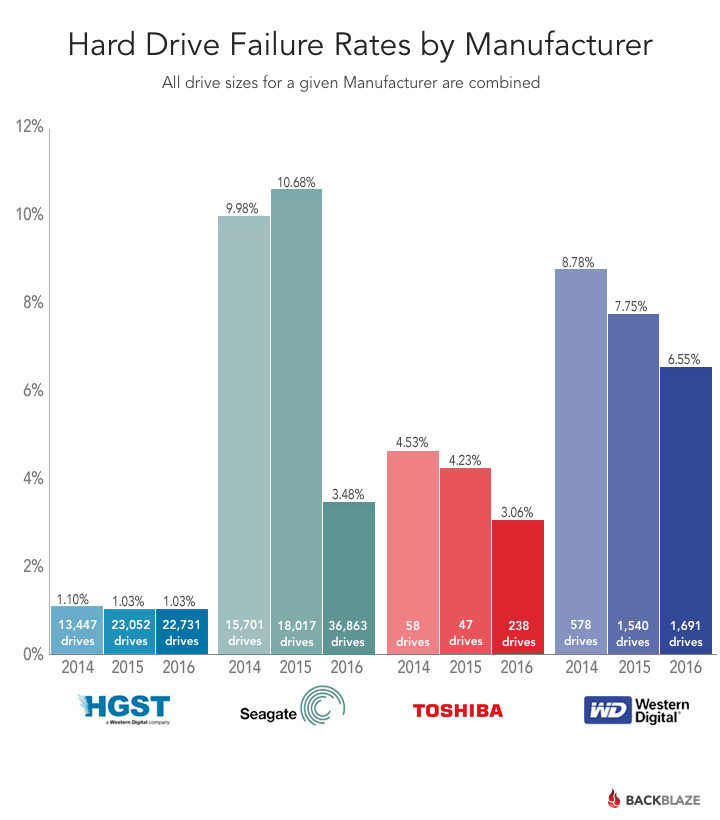